A plant-fungi partnership at the origin of terrestrial vegetation 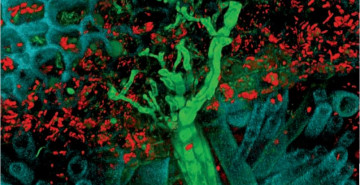 The first plants left aquatic life to live on land 450 million years ago, resulting in the stunning diversity of plant life seen on land today.

This significant step required the ancestor of all terrestrial plants developing evolutionary innovations to adapt to the much lower levels of water and nutrients on land, as well as the direct ultraviolet radiation.

New collaborative research, involving authors from the Crop Science Centre, has demonstrated that this was made possible by the mutually beneficial exchange of resources between plants and fungi.

Previous studies have shown the existence of genes that are essential for the proper functioning of symbiosis, particularly in vascular plants.

Published in Science on 21 May 2021, this research focused on a bryophyte resembling a succulent plant for which such genes had not yet been studied. The research team were able to demonstrate a lipid transfer between the plant and the fungus similar to that observed in vascular plants. By adapting the use of a molecular tool that allows DNA to be cleaved precisely, they were then able to modify a gene predicted as "symbiotic." As in vascular plants, the interruption of lipid exchange between the plant and the fungus leads to symbiosis failure in the bryophyte.

The common ancestor of these two groups of plants, which colonised dry land, must therefore have exchanged lipids with the fungus, as do the plants of today. Thus, 450 million years later, one of the secrets of life's first steps on land has finally been elucidated.

Professor Giles Oldroyd FRS, Russell R. Geiger Professor of Crop Science at the University of Cambridge and Inaugural Director of the Crop Science Centre said: “It has long been proposed that the evolution of the arbuscular mycorrhizal symbiosis was a prerequisite for plant colonisation of land. This new work demonstrates mechanistically how this early innovation occurred.”

This international research was led by the Laboratoire de Recherche en Sciences Végétales at the Université de Toulouse, and was supported by the Bill and Melinda Gates Foundation, as well as the UK Foreign, Commonwealth and Development Office as part of the Engineering Nitrogen Symbiosis for Africa project.